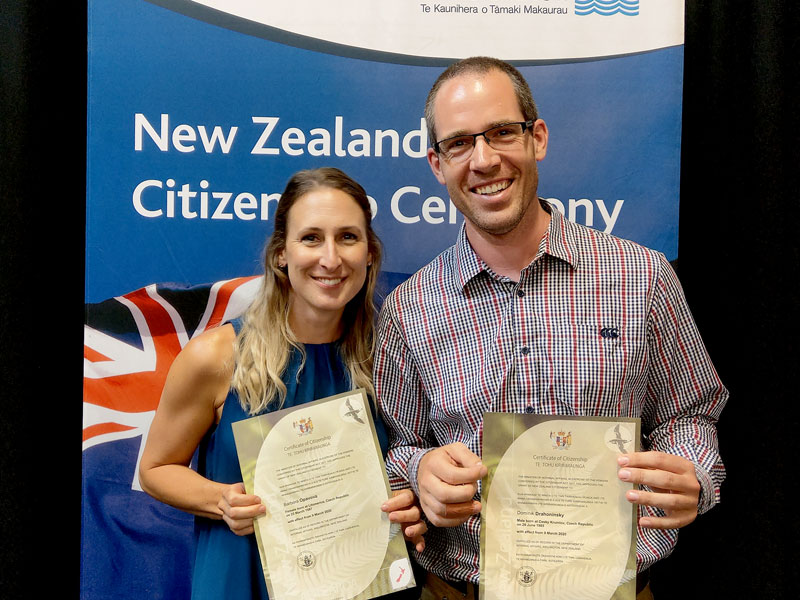 The photo says it all. Their radiant smiles reflect the pride of officially becoming New Zealand Citizens.

But minutes after posing for a keepsake snap of their happy moment, it was off with the glad rags and a quick change back into their CrestClean uniforms for Barbora Opavova and Dominik Drahoninsky.

In an act of true loyalty to their customers, the couple dashed away early from the citizenship ceremony in Orewa in order to finish the cleaning job at Hobsonville School they had started a few hours earlier.

“We had to reschedule the whole day,” says Barbora. “Went to work before attending the ceremony then we got dressed up. Afterwards I had to change back into my uniform on the way to the school.

“We finally finished work at 2 o’clock in the morning but it was a good day and it was a lot of fun.”

The couple, who are originally from the Czech Republic, have been CrestClean business owners for almost seven years. Becoming New Zealand Citizens is one of their “milestone” achievements, they say.

Another goal they ticked off was being able to purchase their first home, all thanks to the success of their business.

“It only happened because of CrestClean, otherwise we would not have been able to afford to buy a house in New Zealand,” says Barbora.

Dominik came to New Zealand to improve his English and became a carer, working with people who are disabled though having sustained a brain injury. Barbora, who has a master’s degree in teaching, found work in a kindergarten.

After a while they were in a good financial position to invest in a business of their own. “We are not party types so we were able to save money to buy a CrestClean franchise,” says Dominik.

“Getting citizenship is another goal that we’ve achieved. We feel very proud”

Last year Barbora and Dominik were at the centre of an animal rescue drama when they saved the life of a baby bird that was stuck in a drain at the school where they were working.

Quick-thinking Dominik used an attachment from his vacuum cleaner to scoop up the young chick, after Barbora saw it fall into a deep storm water drain at Hobsonville Point Secondary School.

A heart-warming video of the rescue captivated TV viewers throughout the country when it was featured on TV3’s The Project.

The couple’s actions in saving the bird also won the praises of an Auckland veterinary surgeon, Dr Berend Westera, who said it was “just wonderful”.

In recognition for the wild life rescue, the couple were later presented with a special Certificate of Appreciation by CrestClean’s Managing Director Grant McLauchlan.

Caroline Wedding, CrestClean’s Auckland West Regional Manager, says Barbora and Dominik have an x-factor in the way they run their business.

“They are young and forward-thinking and have an entrepreneurial approach to their business. They take real ownership of everything they do.

“They come to me with solutions not problems and work things out and add value.”