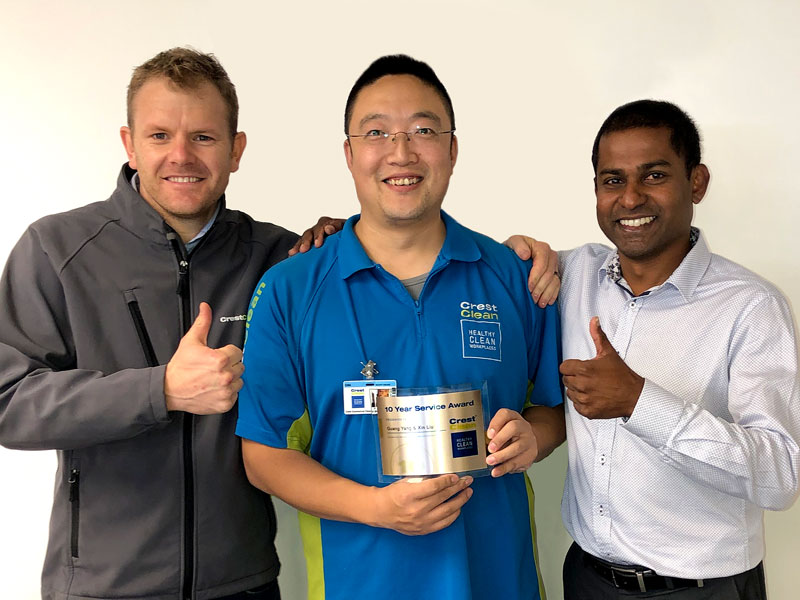 Family and sport are his two loves and Sunny Yang gets plenty of time for both.

After 10 successful years with CrestClean, the Christchurch business owner says deciding to buy a cleaning franchise was one of the best decisions he’s ever made.

“I can manage my own time and I get plenty of time in the day to spend with my son. I don’t think any other job would give me so many options.”

When he started with CrestClean in 2010 Sunny and his wife Grace had just become new parents. As well as lots of family time, Sunny has enjoyed being able to take part in playing basketball – his other passion.

“Cleaning is still the best career option for me,” he says. “I get my own time to play basketball as well. I initially chose the job because of my sport.”

As well as running a successful business for more than a decade, Sunny has had a stellar 12 months. In 2019 he was a standout winner for the award of Franchisee of the Year for CrestClean’s Christchurch North region.

Later that year he played a leading role in the company’s Global Superstars campaign. He represented China to celebrate CrestClean’s cultural diversity. Its franchise owners are from over 54 countries, all operating successful cleaning businesses.

In a series of unique individual videos, franchise owners explained in their own language what they most enjoyed about being a CrestClean business owner.

Sunny was not only filmed carrying out cleaning duties, the video showed him demonstrating his talents on the basketball court.

“It was a lot of fun making the video,” says Sunny. “Many of my friends saw the video and became interested in joining CrestClean.”

As well as being a successful franchisee, Sunny enjoys passing on his skills in his other role as a CrestClean Regional Trainer. He takes pride in mentoring newcomers to the industry and passing on his experience.

To mark his 10 years’ service, Sunny picked up a $2,500 bonus from CrestClean. To celebrate Sunny and Grace went out for dinner. “I took my whole family to a really good high-end restaurant. My parents and my parents in law. We had a really great time,” he says.

“He is really focused on doing a fantastic job for his customers. He’s much appreciated and has achieved so much, personally and professionally in his 10 years with CrestClean.”