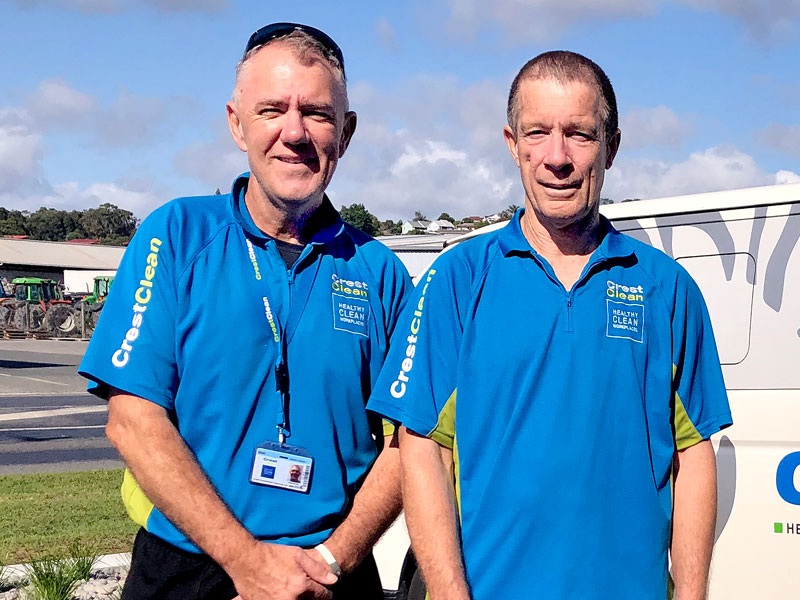 Edward Irving and Kelvin Walker pitched in to help after a local school was vandalised.

CrestClean’s Edward Irving didn’t have to think twice when a Whangarei school called for help after vandals broke in and wrecked two classrooms.

Along with franchisee Kelvin Walker, who looks after the cleaning at Morningside Primary School, Edward rushed to the school to see what could be done.

Teachers, who had given up their time during the holidays to carefully prepare their classrooms, were left gutted after discovering their hard work had been wiped out.

Reflecting on the incident, which occurred earlier this year, Edward, CrestClean’s Whangarei Regional Manager, said: “When we got there it just looked like a disaster zone. There was broken glass absolutely everywhere.

“Six big window panes got smashed. Bookcases had been kicked over and everything was on the floor and covered in glass.”

It was an emotionally charged scene, says Edward. “It was hugely upsetting and disappointing for the teachers. It was a diabolical act.

“The crazy thing is they didn’t steal a single thing. They just wrecked the classrooms.”

The CrestClean team began carefully working out a plan. “We had to figure out what could be saved,” says Edward. “The caretaker brought in gloves and a large bin for the broken glass.

“We started at one end of the building clearing the area of glass fragments. Then the glass repairers arrived with machines that could pick up glass.”

After four hours things were getting back to normal, says Edward. The two men happily gave their time without a charge. The incident occurred earlier this year.

“We knew the teachers weren’t getting paid to be there. It was their day off,” says Edward. “It felt good to contribute our time free of charge.”

It is understood police later apprehended the culprits, who admitted breaking into the school.