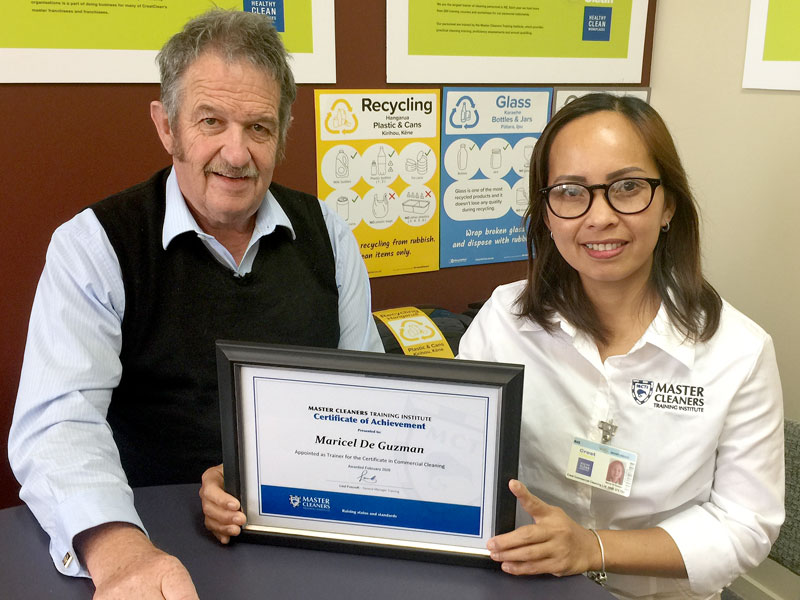 Maricel DeGuzman, who has been with the company for five years, has been appointed as a Regional Trainer for Master Cleaners Training Institute.

Along with her husband Martin, who was also a registered veterinary surgeon when they lived in the Philippines, the couple run a large CrestClean franchise in the city.

For Maricel, helping newcomers to the cleaning industry has become a passion that brings a strong sense of fulfilment. “You’re happy and fulfilled that you are helping others and sharing the skills you’ve gained,” she says.

In her new role, Maricel takes franchisees through practical and theory sessions leading to the Certificate in Commercial Cleaning.

Maricel and Martin and their two children arrived from the Philippines in 2007. They left behind family and friends, and emigrated to New Zealand to make a new life for themselves.

In 2014 they took the opportunity to purchase a small franchise with CrestClean and undertook cleaning in the evenings for a number of customers to supplement their income.

As they grew their franchise, it became obvious to them there was an opportunity to expand their business further.

Maricel stepped aside from her day job to spend more time on their business. As a mum of two young children, being a franchisee also gave her more flexibility in the hours she worked.

“What I really like about cleaning is that you have your own time and you can chose when you begin, unlike if you are in a job as an employee and have to start at a set time.

“When the kids were young I could adjust my cleaning time to suit the family.”

Later Martin undertook further training and certification, adding carpet cleaning and specialist window cleaning to the range of services the couple could offer their customers.

“As he said goodbye to the hundreds of cows on the farm that he had milked twice every day for many years, they found satisfaction in not only the work that they were doing for their CrestClean customers, but of course also the new income level they then found themselves at.”

The couple’s hard work has given them a more comfortable lifestyle, says Glenn. “They have built a brand new house here in Invercargill for themselves and their two children and they have just purchased their first rental property in the city as well.”