Living the Kiwi dream with a house of their own 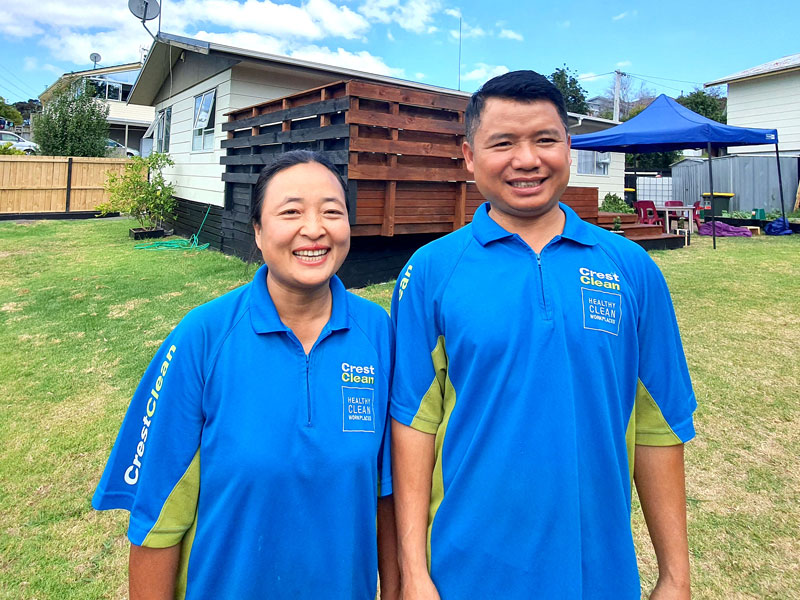 Thang Hlawnceu and his wife Van Par Hnem in the garden of their new home in the Auckland suburb of Massey.

A determined CrestClean couple have managed to achieve what for many is the impossible dream.

It’s through their hard work that Thang Hlawnceu and Van Par Hnem have been able to purchase a home of their own in Auckland.

After years of renting they are loving the freedom of being homeowners for the first time. Thang says it’s the success of their CrestClean business that has brought the change in fortune.

“Auckland house prices are very expensive but we are lucky to have been able to buy one,” says Thang, who is originally from Burma and has been in New Zealand since 2006.

The three-bedroom property is on a large section and there’s plenty of space for the couple’s three children. “I like the views from the house. It’s very clear and open and it gives us a good feeling,” say’s Thang’s wife Van Par Hnem.

After moving to New Zealand in 2006 with his wife and three children, Thang worked as an interpreter and delivery driver before buying a CrestClean franchise.

It was one of the best decisions he’s made. “With CrestClean there’s no stress and you have your own business,” he says. “I like getting good comments about our work. Making everything look like new for our customers is a good feeling.”

Caroline Wedding, CrestClean’s Auckland West Regional Manager, says it’s a remarkable achievement that the couple have been able to secure a home in Auckland, where property prices are among the highest in the country.

“I’m absolutely thrilled for them. It’s great to see people so happy and so proud of what they’ve achieved through their own efforts. All credit to them.

“They work hard, save hard, and live quite simply. They are living the Kiwi dream. They have been able to enjoy fresh produce from their new garden.”