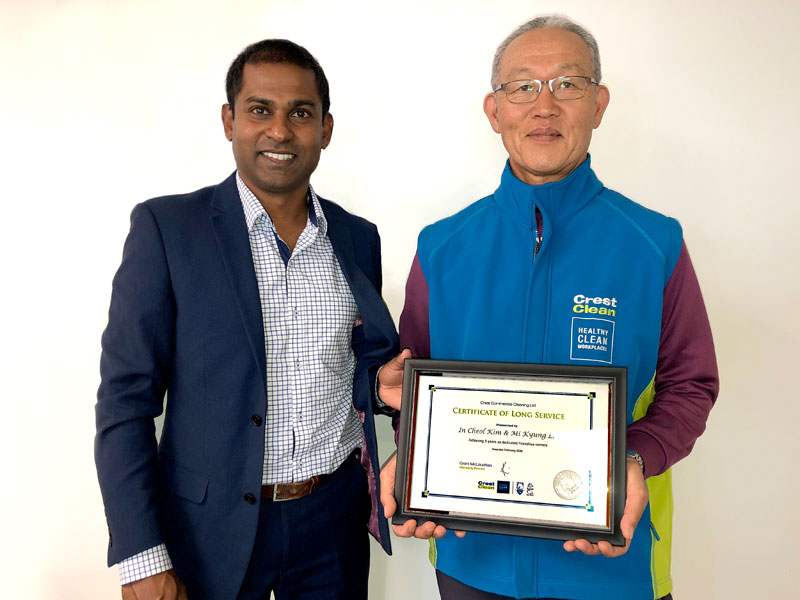 When a Korean friend introduced him to commercial cleaning he liked what he saw and quickly realised it could be a good profession to get into.

Working long days at the wheel of a taxi, David Kim was more than ready for a change of direction, having spent 10 years as a cabbie in Christchurch.

But he didn’t take long to make up his mind when his friend announced his plans to return to Korea and suggested David should consider buying his CrestClean business.

The rest is history, and now five years later David says he’s never looked back and is loving the freedom that comes with being a CrestClean business owner.

He arrived in New Zealand 19 years ago from Korea, where he worked as a property valuer. As well as being a cabbie in New Zealand, David has also been a dairy owner here.

But like taxi driving, working in a shop also meant full-on days, he says. “It was very hard work with long hours, seven days a week.”

These days David and his wife Mi Kyung Lee get to see a lot of each other. As well as doing the cleaning together, the couple get plenty of time to play golf and for tramping, their other shared interest.

“My wife and I often go to the mountains or to the golf course,” he says. Having free time during the day has a lot of advantages, he says. “It’s very quiet compared to weekends, it suits us well as it’s less busy.”

Being his own boss suits him well, says David but there’s also the buzz of doing a great job for his CrestClean customers. “When I’ve finished the cleaning and everything looks good it makes me feel very happy inside.”

Yasa Panagoda, CrestClean’s Christchurch North Regional Manager, says the couple take a noticeable pride in their work and are committed to their business.